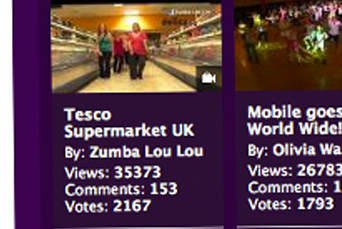 Digital Video PR created a short viral film to enter the competiton, filmed at a Tesco Supermarket in Thetford, the film featured a “flashmob” of dancers being hunted down by the store security guards.

With over 20,000 views of the film and social media mentions by Tesco Stores Facebook page (300k + Likes) and Twitter account (10k+ followers). The film achieved top position in the competition in just four days, gaining more votes than any of the other 1,000+ films (many of which that had been entered into the competition for over a month).

A branded Facebook page was created for Zumba Lou Lou with an entrance portal encouraging people to “Like” the page to see the film, leading to over 400 “Likes” within a day of the page going live. To continue momentum for the campaign a Facebook “badge” was created, with users encouraged to tag themselves in the badge then to add it as their own profile picture, this gained added support for the campaign from friends of the Fan page.

Louise Freezer of Zumba Lou Lou says “without a doubt, the Digital Video PR team offered a great all-round service, from creating an excellent film right through to creating a comprehensive plan to gain support through social networks encouraging votes”.

Louise continues “we were so grateful for the social media marketing plan Digital Video PR made and helped to put into place, to get a major company such as Tesco mentioning the film to it’s Facebook fans and Twitter followers certainly helped to push the film into a healthy leading position”.

It was this social media campaign which helped achieve over 2,100 votes for the video, eventually leading to the Zumba Lou Lou film being announced as the winning entry, earning the grand prize of $5,000.

Speak to us today to see how Digital Video PR can help raise your companies profile through social media campaign support. You can see the winning entry into the Zumba Pause competition below.