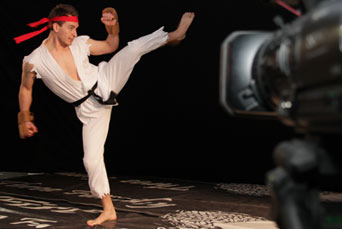 The Student Pocket Guide approached Digital.Video.PR with their idea for a viral film to help them gain votes for a competition from Barclays Bank to win £50,000 to put into their business. Based upon the classic Namco video game, Street Fighter. The video was to feature a white suited Kung Fu expert called “Ryu”, fighting Star Wars character Darth Vader.

Filmed and edited entirely in HD the finished film was uploaded to YouTube, where it received 20,000 views in its first week, leading to over 50,000 views by the end of week two. Many of these views were due to the film being successfully pushed out through social networking sites. The strategy was to look towards the gaming audience to syndicate the content. This was achieved through multiple tweets on Twitter, with many blogs and websites embedding the film, even the official Star Wars and Capcom twitter accounts tweeted about the film to their 200,000+ followers.

We were very pleased to hear that The Student Pocket Guide were regional winners of the competition and ecstatic that a viral film created by Digital Video PR played a part in the successful bid for £50,000 of funding from Barclays Bank.

Why not talk to us about your video requirements today?

Ben from the Student Pocket Guide talks in this short film about working with Digital Video PR on the project.